Fremantle Seaweed is a member of the Australian Sustainable Seaweed Alliance. 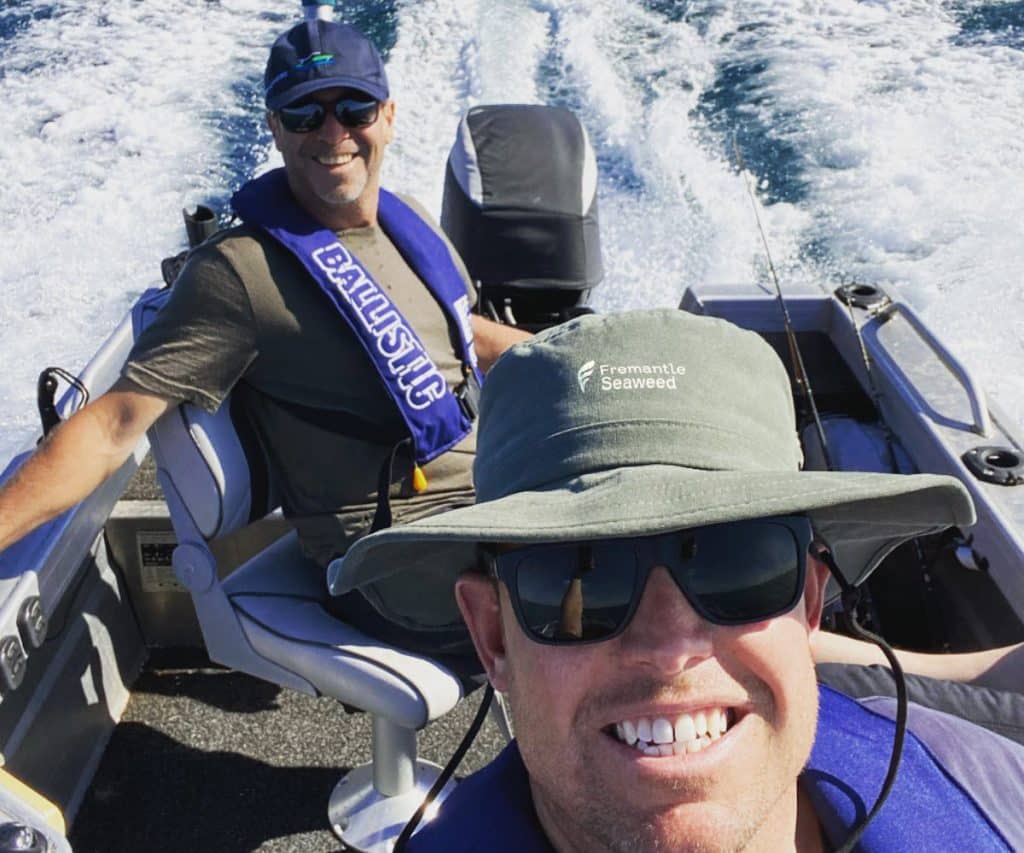 In Western Australia, Fremantle Seaweed is waiting on planning approval for a 32ha marine lease at Cockburn Sound to launch its seaweed farming business.

Co-founders Chris De Cuyper and Mick Holland set up the company in 2020 and spent almost a year raising seed funding and gathering the data needed to apply for a seaweed aquaculture lease. Their application was submitted in August 2021, and final approval from the WA Department Primary Industries and Regional Development was still pending in August 2022.

Public consultation has been completed, along with a review of internal government stakeholders and external stakeholders including commercial and recreational fishers and boaters.

The Fremantle Seaweed application lists 16 native species for farming including Asparagopsis. Chris De Cuyper says that’s the one that would seem to offer the greatest impact on climate change in the shortest time frame – and addressing climate change has been a key driver in founding the business.

But the list also includes a native Pyropia species; internationally Pyropia is used to make nori, widely used in Japanese cuisine. Other species have high levels of carrageenan, agar or alginate, all ingredients widely used in commercial food processing.

Once they’re given the go ahead, De Cuyper is keen to work with the University of Western Australia where Dr John Statton is developing a hatchery and leading research into commercial practices for Asparagopsis seaweed cultivation. Statton’s two-year project is being funded by AgriFutures Australia. De Cuyper says Murdoch University has also offered to help with hatchery facilities.

“We will be very reliant on partnering with a university or another researcher to start with, but we can’t pull the trigger on that until the lease is approved. Once that happens, we are fully-funded to complete the marine operations to grow our first crop, thanks to a seed round of funding with an impact investor.

“A national seaweed hatchery network that can supply various types of seaweed from Asparagopsis to kelps – that would be a great opportunity for collaboration. I like the model of the oyster hatchery in WA, which is owned by the government, but run by a private operator who provides oyster spat that oyster growers buy and grow out.

“A model like that for seaweed would be a great support for smaller businesses like Fremantle Seaweeds. And it would help us to make the most of the ocean resources that Australia has,” he says.

In addition to ongoing research in preparation for beginning to farm, they are also looking at other possible marine lease sites along the WA coast, including as far north as Carnarvon.

They also recently received a state-based Blue Gravity grant that supports marine innovation and collaboration. It will fund consultations with the business facilitation firm For Blue to help develop their business model and financial plans, subject to the approval of their marine lease.

Doing business in Fremantle for social and environmental outcomes.

We acknowledge the Whadjuk peoples as the Traditional Custodians of the waters in Derbal Nara that Fremantle Seaweed’s aquaculture operations are situated upon. We acknowledge the wisdom of Aboriginal Elders past and present and pay respect to Aboriginal communities of today. We recognise the rich and diverse culture of Aboriginal and Torres Strait Islander peoples, and the valuable contribution this diversity brings to our aquaculture operations. We will respect the waters of Derbal Nara. Always was, always will be.